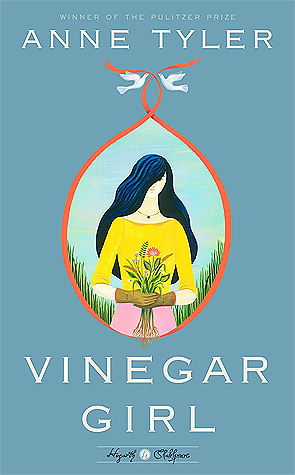 Anne Tyler’s novel Vinegar Girl is a modern interpretation of Taming of the Shrew. Or at least it’s trying to be. In Shakespeare’s original version, Petruchio woos Katherine “the shrew” by “taming” her. In other words, Katherine goes from being a strong willed, outspoken woman to more of a mouse who obeys her husband.

Obviously, such a subject is in need of a modern facelift. Tyler attempts to put a modern spin on things by reimagining the play’s problem. In Vinegar Girl, Pyotr (Petruchio’s modern counterpart)  needs to marry  someone before his academic visa runs out. Dr. Battista doesn’t want his brilliant research assistant to leave, so he forces his daughter Kate (Katherine’s modern counterpart) to pretend to date and then marry Pyotr in order to keep him in the country. Cue modern criticism of ingrained patriarchal institutions, right?

Don’t hold your breath. While Kate starts out as strong-willed, the veritable Vinegar Girl, she easily acquiesces to her father’s wishes with little to no character development. Missing too is Kate’s agency. Though Tyler tries to make it seem like Kate is going against the grain by developing feelings for Pyotr and deciding to marry him on her own, the characters and the plot both inevitably fall flat.

With a plot that is as stilted as the dialogue and characters who often behave like cardboard cutouts, it’s difficult to find something to praise about this novel. However, Tyler’s prose is easy to digest. There is no fluff or filler. Vinegar Girl was a quick read, at least.