More than Weirdness Machines: The Inequality of Hurricanes in Fiction 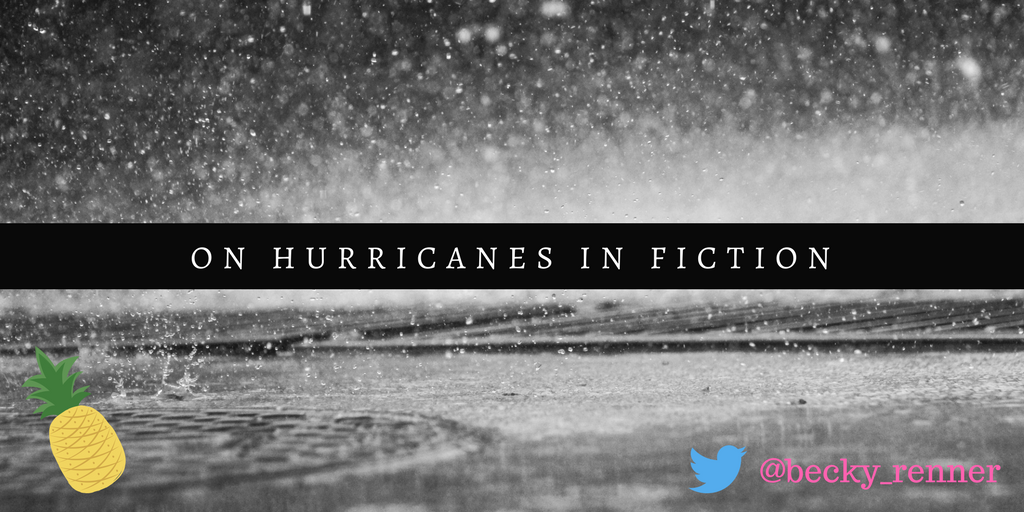 I wrote this post right after Hurricane Matthew, but my life was so scrambled that it never got posted. The following are my belated thoughts on hurricanes in fiction.

Like many of my fellow Floridians, I evacuated for Hurricane Matthew. As I’m writing this, it’s been nearly a week since it hit. I’m still without power. I’m sitting in Denny’s, basking in the Wi-Fi, and thinking about how in my 26 years (in other words, my life) in Florida, hurricanes have always acted as weirdness machines.

Aftermath carries a bizarre glow, a strange cast to the sky. Oddities have been shaken out of hiding. Strangers carry on conversations, empathize and sympathize, never to see each other again. Matthew sent me to hunker with my cousin and his wife in Ocala, where I saw a letter-board outside a hunting outpost that read “Remember Lot’s Wife.” Driving home, a man dressed half in Army fatigues and half in Confederate gray uniform crossed the road in front of my car. I have found stray shot glasses in my yard after a storm not once but twice.

As I stood up on the roof of my house for the first time three days ago, broom in my hand, I considered how hurricanes force people to the edges of themselves. This one got me up on my roof to discover the swampy landscape of my neighborhood. It made me conquer my fear of heights. Hurricanes do the same in fiction, acting as an intense kind of plot device.

The first instance in fiction of a hurricane (that I know of) occurs in Shakespeare’s The Tempest (1611), but that is far from the only one. In Zora Neale Hurston’s Their Eyes Were Watching God, which is set just outside Orlando, FL, the characters weather a hurricane which acts as a narrative pivot point and a symbol for how life in its extremities is beyond the characters’ control. Hurricane Katrina menaces the events in Jesmyn Ward’s Salvage the Bones (2011), and in Chantel Acevedo’s The Distant Marvels (2015), a hurricane acts as a pressure cooker to trap the characters together, to create urgency, and to boil the narrator’s story.

Done well, hurricanes serve many narrative purposes; but the most important is how they affect the characters’ lives. Many times, a hurricane is a real-life point of no return. People who have lived through devastating hurricanes know this. Though I’ve lived in Florida all of my life, none of the hurricanes I’ve weathered have wreaked such ruin. But I have seen it. In 2008, I went on a Habitat for Humanity trip to New Orleans. Three years after Hurricane Katrina ravaged the Gulf, signs of devastation lingered: bent streetlights, abandoned homes, waterlines striped on stucco and whitewashed clapboard.

Most prominent of all were the lines that separated poverty and wealth. My relatives who live in the Garden District had evacuated before the storm hit. They’d returned to their historic home to find it largely untouched, the water having never risen above the level of their porch. My volunteer group only passed through that area sightseeing. We spend most of our time in St. Bernard Parish, a low-lying bayou outside the city proper. We slept in an abandoned (read: horror-movie creepy) school renamed Camp Hope, and during the day, we ventured out on missions of construction. There are three instances I remember most:

Look back at my short list of novels. I had tried to make the list indicative of excellence, hurricanes that are essential to the narrative, hurricanes that are written well. Except for The Tempest, they happen to all have been written by authors of color. What does this mean? Just like how it stood out in stark contrast during my time spent in New Orleans, marginalized groups experience disaster differently. Hurston’s main characters live in the historically impoverished area of Eatonville, FL. Ward’s Salvage the Bones focuses on children living in rural poverty in Mississippi. Acevedo’s The Distant Marvels takes place in Castro’s Cuba in which her main character, the elderly Maria Sirena, has lost everything. The characters in these novels have so little before their respective hurricanes hit.

I can laugh at the shot glasses in my yard, soak in the experience of standing on my roof; but it’s a Garden District kind of insulation. Even if Hurricane Matthew had knocked my house down, I have insurance. I have someplace to go. These novels highlight the fact that not everyone affected is so privileged.