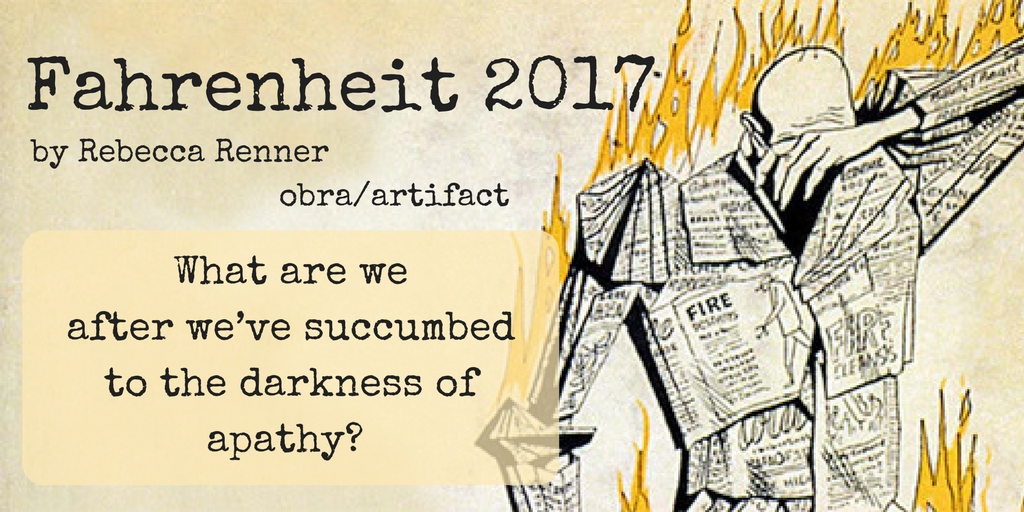 “You don’t have to burn books to destroy a culture. Just get people to stop reading them.” – Ray Bradbury

My students groaned when I passed out the books.

“I thought you said we weren’t reading another novel,” said the kid in front.

“I was wrong,” I said. “We’re reading this one because I think it’s important with everything that’s happening these days. Like how we just studied fake news.”

They lazed in their chairs. A guy down front took a pull on his Dunkin Donuts latte, eyeing me like he couldn’t decide if I was up to no good.

The book is Fahrenheit 451 by Ray Bradbury, a novel I’d convinced myself over the summer not to assign. Then the election happened. We (artists, writers, teachers) felt cast adrift. Usually docile people brought comments-section level scorn into the hallways and onto the streets. The raised voices often reeked of racism, sexism, classism. I will always remember a Latinx student coming to me in tears the day of the election. A classmate, a “friend,” said her mother would be taken away. That classmate was the boy sitting in front of me, sipping his coffee.

What is Fahrenheit 451 about?

“Ironically,” I said, “it’s about people who don’t read books.” This got a few chuckles. In my few years in the profession, I’ve learned that teaching is less “Oh Captain, My Captain” and more standup comedy, more crowd control.

“But seriously, you guys,” I said. “It’s an important book, because it shows what happens when people stop reading and learning and start taking everything at face value.”

“Not everything on the internet is true,” someone said in the back, echoing my previous lesson.

“Exactly,” I said. “And it’s a dystopia. They don’t just not read books. They burn them.”

This conversation repeated three times that day, and every time, they joked about wanting to burn the novels. But inevitably someone asked why. What is the point of burning books? They’re just these heavy things that weigh you down.

Not only do books contain information, I explained. They hold ideas. Ideas are like potato chips. You can’t just have one. One idea sparks another and another. The more you read, the more perspectives you will see, and the more likely you will be not only to think for yourself, but to act with empathy. In the face of tyranny, nothing is more dangerous.

The idea that we are living in a dystopia has been floating around since long before November. A deluge of dystopian novels hit the shelves in the past decade or so, ranging from Divergent (2011) and The Hunger Games (2008) on the YA side, to Station Eleven (2014) and The Windup Girl (2009), to Cormac McCarthy’s Pulitzer-winning The Road (2006). Both George Saunders and Jennifer Egan, juggernauts of the literary world, project their fiction into lands of anomie, full of people whose lives are dictated by technology and possessed by advertisements. Junot Diaz asserted that dystopia is the narrative mode that defines our generation. It’s no surprise that many an author has compared our present to the dystopias littering our shelves.

Merriam-Webster describes a dystopia as “an imaginary place where people lead dehumanized and often fearful lives.” Save the imaginary part, the definition rings true. Images flash to mind of immigration detention camps, of my student in tears the day after the election, of prisoners sleeping in a gymnasium filled with bunk beds because our country locks people up at a higher rate than any other in the world. We stare at screens instead of looking at each other. We blast hate in comment sections, forgetting that we may as well be climbing through someone’s living room window, shouting “moron! snowflake! troll!”

Instead of following one dystopic vision like a blueprint, the present echoes different novels depending on where you look. Though sales of 1984 skyrocketed after the election, and Orwellian doublespeak peppers the news, the present little resembles 1984. While Big Brother Is Watching, Trump could care less about you.

For me, Fahrenheit 451 comes closest as a parable of the present, with its eerily familiar seashell ear-thimbles (hello earbuds), televisions the size of walls, and a populace too distracted by entertainment and gossip to register the distant war or the fighter planes slicing over their heads. Fahrenheit 451 illustrates a future where we have lost the search for truth that inspired us to scribe holy texts, chart the stars, and map the brain. In essence, what Bradbury fears we risk to lose is the voracious curiosity that defines us as human.

In my first year of teaching, my senior English class read “The Bystander Effect,” an article about the 1964 murder of Kitty Genovese. It appalled my students that a woman could be murdered in broad daylight, in full sight of countless neighbors, but not one of them came to her aid. Cue a collective case of “The Ifs.”

“If I saw somebody getting murdered, I would help her.”

“If I had been there, I would have done something.”

So I posed Philippa Foote’s Trolley Problem, (AKA “The Internet’s Most Philosophical Meme”) to my students. According to Clio Chang for The New Republic, the Trolley Problem perfectly illustrates 2016. While this article plants tongue firmly in cheek, I think there is something to consider here.

I posed the question again to my student, C, while writing this essay. He looked at me like I’m a doofus. “I’d save the five,” he said. He may as well have added “Duh” at the end.

“Okay, what if that one person on the tracks was your best friend?” I said. “Would you kill the five to save them or would it still be about numbers?”

He and his friend K both nodded, no longer smiling. They’d save the people they love.

“What if the scenario was different?” I said. “What if you were on one side, the five people on the other?”

It’s no stretch of the imagination that we fall in love with the characters we read. People who read books where characters represent different facets of our society (races, classes, religions, genders, orientations) than themselves are more likely to put a human face on laws and vote with their consciences regardless of their political affiliation. Without our imaginations to lend a face to the unknown, we are the only persons under threat in the equation. It’s easy to make comparisons with Nazi Germany, to say “If I lived back then” and “Not this time, motherfucker,” but if we can’t conceptualize the personhood of people who aren’t exactly like ourselves, what’s to stop us from simply keeping our heads down?

“What does this have to do with Fahrenheit 451?” C asked. By lunch time the next day, I was still writing this essay. C looked over my shoulder, scrutinizing. “I don’t get what point you’re trying to make.”

In Fahrenheit 451, Guy Montag memorized part of the Bible, and then he hid. He needed to keep the knowledge safe for a better time, another generation. But we don’t live in the America of Fahrenheit 451. We shouldn’t hide away for a safer future. Instead, we live in a time like no other. Now more than ever before we have an outlet for our voices to be heard. It is not our job to hide and wait.

At AWP, Azar Nafisi’s resonating keynote address (which Jared almost missed) called artists to action. She quoted James Baldwin, saying “artists are here to disturb the peace.” Because artists hold a mirror to tyranny, they show it for all its ugliness and warts. Therefore, tyrants “know the dangers of poetry.” It is what brings their false realities to light.

So now is not the time to be silent and remember, not the time to sand our edges down in hopes things will go smoothly. We don’t live in a dystopia, because we possess all the words we need to speak truth to power, and to disagree, because dissent is patriotic.

What are we after we’ve succumbed to the darkness of apathy? Not just gullible or easily sold, led by internet ads that track our search data, fake news sites, or politicians that spout assertions without justifying facts. What are we without our national parks? Our libraries? Our museums? Our schools? Are we truly free? These things we serve to lose with this administration—arts, nature, learning—can’t be called mere diversions. They make up the fundamental connections in our brain. They engender empathy. Without that, we’re just zombies staring at our phones.