Review of June by Miranda Beverly-Whittemore 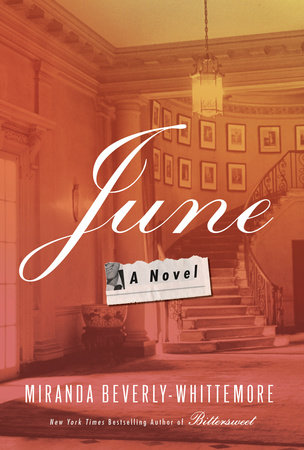 I went into my reading of June

by Miranda Beverly-Wittemore with excitement. The blurbs all touted its portrayal of Hollywood’s golden age. Murder, you say? Dark family secrets? All in a beautiful mansion that has fallen into disrepair? That’s totally in my wheelhouse, so I jumped on it as soon as I could. By now, I should know better than to go into a novel with so many expectations. Luckily, I wasn’t totally let down. Although June is far from being perfect, it ultimately delivers on its promises with a very satisfying end.

June switches between two years, 1955 and 2015. In 1955, a Hollywood movie crew has come to St. Jude, Ohio (which reminded me of Winesburg, Ohio, *shudder*), and June—the character, not the month in which both time periods stay—falls in love with a dashing Hollywood star, Jack Montgomery. Intrigue, murder, and blackmail all follow. It’s too bad that Beverly-Wittemore saves these until the last 3rd of the book. In the 2015 sections, Cassie Danvers, who has been living in her grandmother June’s decaying mansion since June’s death, receives word that she will inherit millions from Jack Montgomery, this famous Old Hollywood movie star who she has never met. Tate Montgomery, Jack’s starlet daughter, isn’t exactly keen on this idea. So Tate comes to Winesburg—I mean, St. Jude—to get Cassie to take a DNA test.

But just for the sake of being contrary, or maybe it’s to string out the plot, Cassie refuses

to take the test while she and her limp noodle love interest, Nick, search for solid proof that Jack Montgomery could be her great grandfather. I’m not sure why they needed to do this, because Two Oaks, that beautiful, decaying mansion willed to Cassie by June, gives people sleeping inside it dreams of the past. Heck, Two Oaks sometimes acts as focal “character” for parts of the narration. It’s an if-walls-could-talk kind of thing.

The odd surrealism of the house and the bloated intro almost made me bail. Truly, little happened before about page 150. Sections like this chunky-clunky paragraph dragged the narrative down:

“Which she then opened, discovering the light was all funny for morning. Too yellow, too flat. The revelation of afternoon made Cassie’s conviction waver; she knew what Nick would think when he saw her: not a grown-up. But why should she care? Did she care? Why did she care? She wished she had time to go back upstairs, change into something better. No, that was caring, wasn’t it? Not caring was standing here, wearing whatever she wanted. Wasn’t it? Should she disappear back into the house, and let them wait by the front door, let them ring? She wasn’t sure she could handle that horrible sound again,” (Beverly-Whittemore 76).

This is kind of unlike me, but I urge you to get past them. The narrative certainly has its problems: sometimes dithering prose, a plot that drags its feet, and a few out-of-character moments for Cassie. But the last 3rd of the book, to me, was worth the rest of the slog. It’s interesting enough to feel like I didn’t waste my time. In the end, June lived up to its promises. It was a satisfying read, but it could have used a little pruning.

I received this book from Blogging for Books for this review. (It’s a beautiful hardback copy that I’m really a fan of.)

You can read an excerpt here: http://www.penguinrandomhouse.com/books/248329/june-by-miranda-beverly-whittemore/

Are you a publisher or publicist? Have a book you want me to review? Read my review policy. 🙂