Review of The Vegetarian by Han Kang 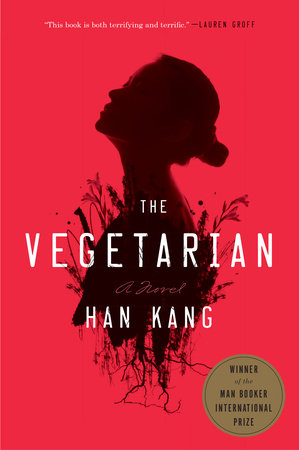 “It’s your body, you can treat it as you please. The only area where you’re free to do just as you like. And even that doesn’t turn out how you wanted,” (Kang 182).

On its surface, The Vegetarian by Han Kang is a deeply disturbing story of a woman’s descent into madness. But don’t let the surface fool you. At its core, this novel is about the rules for femininity that confine Korean society.

While The Vegetarian is divided into three sections, each section centers on the main character, Yeong-hye. It is absolutely vital to the novel’s message that the story be told from outside points of view. The first two of these perspectives are male: Yeong-hye’s husband and Yeong-hye’s brother in law.

From her husband’s perspective, Yeong-hye’s first symptom of insanity is that she stops eating or cooking meat, in direct disobedience to her husband and father. This section comes to a head when her father tries to physically force Yeong-hye to eat meat. Yeong-hye resists, and in an act of defiance, she cuts herself with a knife.

The second section, from Yeong-hye’s brother-in-law’s perspective furthers the process of othering Yeong-hye. Yeong-hye’s brother-in-law, an artist, sexualizes her in two pieces of artwork, the first where she is alone, her naked body painted with flowers, the second in which she is part of a sexual act. The second ultimately turns into a pornographic video between Yeong-hye and her brother-in-law. Eventually, Yeong-hye makes it clear that it’s not the artist that turns her on, but the art: she is gratified by the flowers painted on their bodies. This is because Yeong-hye believes she is becoming a plant.

In-hye, the third section’s narrator, institutionalizes her sister Yeong-hye for this seemingly insane belief. However, Yeong-hye’s real problem, it seems, is anorexia. By the end of the book, she has refused to eat completely. But is Yeong-hye’s experience entirely mundane? I don’t think so. I believe there is something supernatural at work, especially because of the dreams and visions experienced by several characters throughout the book.

Yet no matter how surreal Yeong-hye’s experience is, she is confined, and her free will and the right to make choices for her own body are taken away, reminiscent of treatment for “hysteria” in the Victorian West. Kang ultimately underscores the tragedy of Yeong-hye’s loss of agency with her choice of a female narrator for the book’s final section, in contrast to the men who have voiced the rest of the book, superimposing their own desire and lack over Yeong-hye’s body and mind.

I highly recommend The Vegetarian by Han Kang. It’s astonishing (but tight!) prose and highly significant subject matter would make it the perfect book for readers of literary fiction and maybe even for book clubs that want to push the envelope and spark discussion.

Disclaimer: A free copy of this book was furnished to me by Blogging for Books in exchange for an honest review.