Review of The Most Dangerous Place on Earth 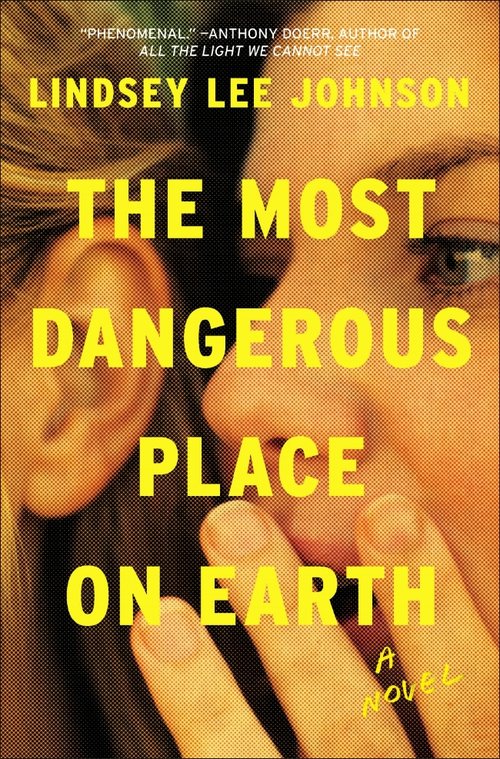 Full of turmoil, love, loss, and pain, Lindsey Lee Johnson’s The Most Dangerous Place on Earth is a complex meditation on privilege and the crucible that is adolescence. Set in Mill Valley, California, at the real life Tamalpais High School, the story centers on a fledgling teacher, Molly Nicoll, as she discovers and comes to terms with the complex lives of her students and her role (or absence) in their evolution as people. With perspectives that alternate between Molly and the main group of her students, Johnson weaves a series of interconnected life stories that create a portrait not only of the idyllic Mill Valley, with its towering redwoods and foggy views of San Francisco Bay, she creates a portrait from the inside, from the multifaceted and often breaking hearts of the teenagers who are beginning their lives there.

Each student’s story highlights the ups and downs of what it’s like to grow up in privilege. Or course there is money, but there’s also pressure, family strife, and self destruction; and like all teenagers, Miss Nicoll’s students are trying desperately to create the people who they will someday be. The stories bookend with the tragedy of Calista Broderick and how she triggered the bullying of her middle-school admirer, Tristan Bloch. The first major event in the novel is Tristan’s suicide. The rest of the novel pulses with the undercurrent of this tragedy, casting into stark relief the complacency, selfishness, and cruelty in each of his classmates’ narratives. To paraphrase Louis C.K.: Everything is beautiful, and no one is happy.

Obviously, Johnson has a great deal to be proud of with this novel. It’s a stellar debut with many accomplishments. The teenagers talk like teenagers, and they have to deal with normal things, like being “dress-coded.” They misspell things in text messages. They eat junk food and wipe their hands on the furniture. The teachers, too, are spot-on. They complain and worry, build up barriers or overstep their boundaries. Johnson handles social media particularly well, as she does with social and digital taboos.

Johnson’s most noteworthy accomplishment here lies in her ability to differentiate between the voices of her many characters. Each point of view sounds different and gives depth to the character, because their diction and tone match the characters’ thoughts.

Here are two sections for contrast. The first is from the POV of Damon Flintov, the class troublemaker:

At the bathroom sink he faced his reflection, ran a palm over his buzz cut. He liked to keep it short—liked the shivery feel of the clippers over his scalp and the dents and gleams his skull made in the mirror. He cracked his neck and felt the donut of flesh at the base of his skull. He hated how he always knew it was there. Hated his fleshy belly, his chest like a woman’s tits. As a kid he’d worn a T-shirt in the pool. Now he wore bigass shirts and jeans and he just didn’t fuckin’ swim. He wasn’t into exercise, ever since that asshole JV football coach kicked him off the team for grades. He didn’t care, he said at the time, loud enough so everyone could hear. Football at Tam was bunk anyway.

His body was what it was, no changing it. But his clothes were bomb and he took care of that shit. The shirt matched the shoes matched the hat. That night, he chose a blazing-purple T-shirt with a neon-yellow swoosh and highlighter-yellow kicks designed to blind. He swabbed alcohol over the silver studs in his eyebrows and trimmed the stray hairs in his nose. Finally, he took out his Swiss army knife that he got for his last birthday, cut his fingernails and scraped the dirt from underneath, jabbed his cuticles with the little plastic stick, snipped his hangnails with the tiny silver scissors. Say what you want about him, he had beautiful fuckin’ hands.

The next is from Emma Fleed, the party-girl dancer:

Emma Fleed danced alone. A vast stage. Shafts of light beamed against her body, warming her face and dazzling her sequined skirt. It was a ballet she did not remember learning, yet her body eased into the movements like it had known them all her life. Oddly, she heard no music, just a steady humming through her body, through the room. The audience was a red-black sea beyond the footlights. She rolled onto the boxes of her toe shoes, rose en pointe. Driving her toes into the floor, she steadied her ankles and flexed her calves and stretched out of her feet, arms above her head, until it felt like floating. Then she stepped and leapt, splitting her legs in the air, and landed with such lightness that only she could hear the soft thud of her slippers on the wood. She set, pirouetted, spotting a point beyond the lights. Rising and spinning, holding her head in perfect stillness before whipping around at the last possible second. Applause shook the room. Her center was holding. Her legs were strong. In this moment, she was exactly where she was meant to be.

Any writer could learn from Johnson by studying how elegantly she differentiates POVs.

However, The Most Dangerous Place on Earth isn’t perfect. My first qualm has nothing to do with Johnson’s writing. While this novel is being marketed as YA, it is decidedly an adult literary novel. That isn’t Johnson’s fault. So when you read this novel, I suggest that you come to it in the right frame of mind. Anthony Doerr called it “Less than Zero for the digital age,” and I think that could not be more on point.

Another issue expressed in other reviews is that the novel is very white. There is only one POV character, David Chu, who is not caucasian. Even so, this representation corresponds to the racial makeup of Mill Valley, which is almost 90% white. Johnson is portraying reality, not prejudices. In that, she is representing a true issue in wealth inequality in our country, as referenced toward the beginning of the book with Miss Nicoll’s class discussion on The Great Gatsby and the American Dream.

My biggest concern at first was how imbalanced the novel seemed. It begins with a major tragedy, Tristan’s suicide. While the final chapter from Calista’s perspective attempts to balance and bookend the initial tragedy, I felt like it didn’t succeed. But the more I thought about it, the more I started to think that maybe that was the point. In the end, there was no easy answer to how Calista (and everyone else) felt about the tragedy that punctuated the outset of their adolescence. Portraying one would have been a lie, because for some of the students, Tristan’s life was only a blip on the radar, and for others like Calista, the idea of him will linger with them, begging what-ifs ad infinitum.

In undergrad, my fiction writing professor Mark Powell always said that the best stories don’t set out to offer answers. They seek to state life’s problems most clearly. In that, Lindsey Lee Johnson’s The Most Dangerous Place on Earth is truly accomplished.

Pre-order your copy from Penguin Random House, so you can get it as soon as it comes out on January 10th!

Disclaimer: I received a digital ARC from Netgalley in exchange for an honest review.