REVIEW: From Here to Eternity Review: Traveling the World to Find the Good Death by Caitlin Doughty 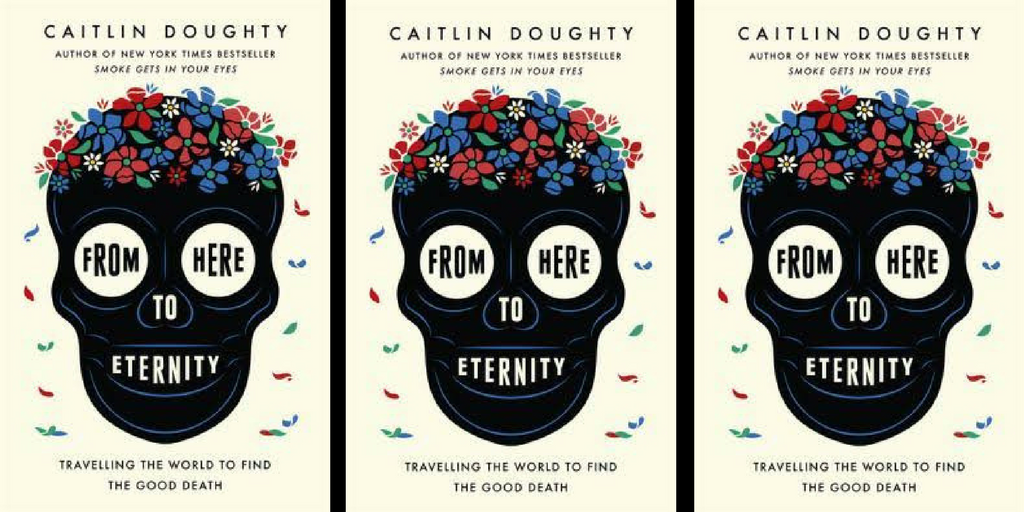 Few life events affect us more than the death of a loved one. At times, it can seem that grief is monolithic, but not every culture deals with death and grief in the same way. The death culture of the US endeavors to paint a pleasing facade over what we consider macabre. Embalmers camouflage the reality of the grave with chemicals and adornments. Cemeteries wall off the dead behind stone, concrete, and coffin wood. In her nonfiction book From Here to Eternity: Traveling the World to Find the Good Death, Caitlin Doughty delves into death cultures around the globe, thus casting a stark contrast between our national death avoidance and cultures that literally take death into their arms.

On her binge of thanotourism, Doughty investigated cultures in Belize, Indonesia, Mexico, Japan, Spain, and Bolivia in addition to small enclaves within the United States. She found two striking commonalities between cultures that don’t deny or try to hide the inevitability of death, in other words, “death positive” cultures. The first is that these cultures live closely with the dead and are not afraid to touch their bodies or their relics. For example, the people of Tana Toraja, Indonesia celebrate ma’nene, during which they exhume the bodies of their loved ones to clean and commune with the mummies. In

Bolivia, many households keep ñatitas, skulls of the dead believed to possess a sacred link with the divine. The second commonality is that, in death positive cultures, the living feel a sense of purpose in caring for the dead. In Mexico, during the famous Dia de los Muertos, families bring offerings to the graves of their loved ones to share a night with their returned spirits. Even in Japan, custom dictates that family members pick through the deceased’s ashes with chopsticks and deposit their bones into an urn.

Doughty brings the life of these cultures to the page with vivid details, some of which aren’t for the faint of heart. However, Doughty’s appealing, insightful, often sarcastic voice makes this morbid topic approachable. This clear writing prowess in combination with her experience as a Los Angeles mortician allow Doughty to make effective contrasts between American death culture and what she believes are healthier attitudes towards death. “In my practice as a mortician,” says Doughty, “I’ve found that both cleaning the body and spending time with it serves a powerful role in processing grief. It helps mourners see the corpse not as a cursed object, but as a beautiful vessel that once held their loved one.”

Despite her Anthony-Bordainesque adventures, Doughty’s message is clear: she wants her American readers to reassess not only how they view death but how they perform grief. She wants Americans to turn away from “business models, upselling families on mahogany caskets and marble headstones” but saving the talk of death until the last minute to a culture that speaks openly about death and honors our dead and our environment instead of building walls to protect ourselves from reality.

NOTE: I received a digital arc of this book from the publisher in exchange for an honest review.

Want to read more of my reviews? Stay in touch by:

Before you try to pitch me your own book, please note that I am closed to book review requests at this time. However, you can read my review policy for when I open them back up again.