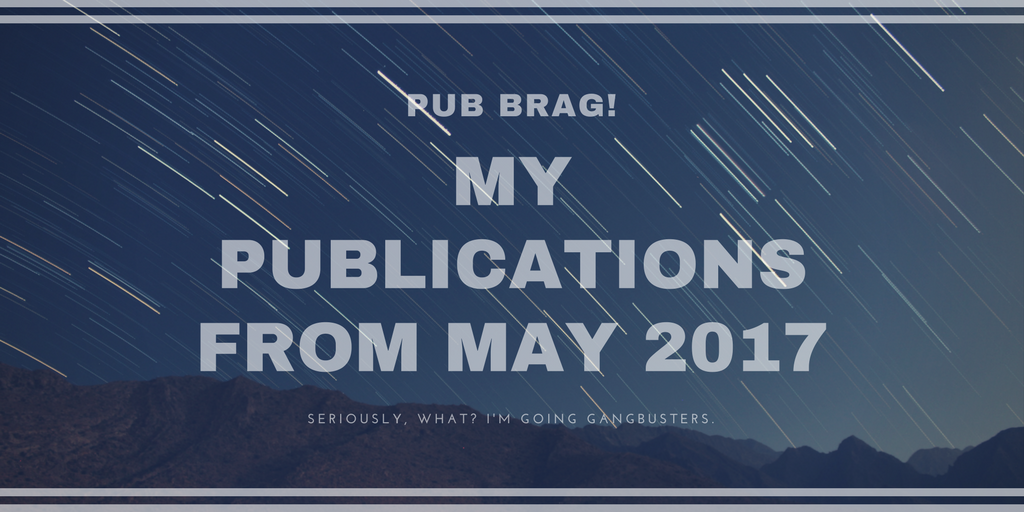 This month has been pretty awesome for me. I’m finally starting to break through into my wishlist publications. For one, I accomplished a serious dream of mine. For a while now, I wanted to be a Book Riot contributor. I applied over and over again. Then at the end of April, I got the magic email.

I became an official Book Riot contributor this past month, and they published four of my articles. I’m freaking giddy.

I also have short blurbs in:

My short story “The Bottomless Hole on Crooked Palm Boulevard” was a runner up for Crab Orchard Review’s Charles Johnson Fiction Award 2017!

It’s a weird story about a hole into another dimension that opens in a suburban Florida street. But it’s really about environmental impact and how what we do in one part of the world can effect another. That seems very apropos these days.

A year ago, my friend Luci and I had the idea to start a literary magazine. We roped our friend Jared in, too, and we set out on our mission. A few months later, Stetson’s MFA made out lit mag the official publication of the graduate program. They took us to AWP and introduced us to amazing writers.

I was the very first Editor in Chief. Now Luci has taken my place. It was a good run. I learned a lot, and I gained serious respect for editors everywhere. It’s a thankless, difficult job that involves a lot of wading through BS, but I’m glad I had the opportunity. I’m also thrilled to have all that free time back.

Two weeks ago, I adopted a kitten from the Humane Society! She’s a feisty little beastie. She’s a sweet baby sometimes, too. This is her, my little Josephine:

I started editing my novel. I’m making additions of scenes, and one of my characters needs a major overhaul. I want to be done with this draft by August, but that’ll be a challenge, since I’m taking a break from it until I come back from Chile.

Also, I’m panicking a little about Chile. I hate flying. Nothing like the constant fear of death as a single-serving friend. Oh boy.

I’m trying to drum up some support on Patreon. Rewards include patron-only blog posts, critiques, ARCs, and even getting your name in the acknowledgements of my book!

All proceeds from Patreon will go toward marketing my book. So if you love me, and you also have money falling out of your pockets, consider being my patron.