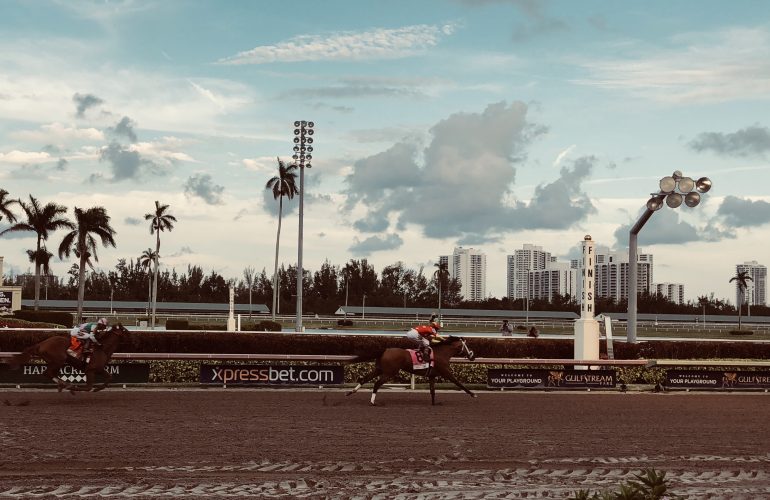 March wasn’t quite the shitshow that February was. I actually had some fun. I went to AWP to meet with an agent(!), but I’m not finished editing my book… So there’s that.

I also went to Books & Books for the first time. I hung out with Chantel Acevedo and Patricia Engel (who are cool, and you should read their books), and I met Tayari Jones! I had a odd discussion with her about fountain pens, and then I gave her mine because I’m a weirdo, but also so she could sign her lovely books for people and so that my lucky pen would give her luck to make beautiful words (that I can read someday. Okay, I had an ulterior motive.)

This past Saturday, I went to the Florida Derby with my cousin. The novel I’m writing/slowly editing is about a guy, Rex, who just got out of prison and came back to his parents’ horse farm in Ocala to become a horse trainer. The man who owns the farm says he’s going to sell the place if they can’t train a horse to win a Triple Crown race. So Rex and LC, the owner’s disgraced debutante daughter, try to train a horse to save the farm… Romance ensues, etc.

The Florida Derby plays a big part in the book, so really immersing myself in that world again, at least for a day, felt important. It was also great to spend the day with my cousin. It’s a relief to hang out someone who is not only completely acquainted with your weirdness but totally down for where that weirdness takes you, too.

I told my cousin I’d buy her dinner if I won, so I’m taking her with my high-rollin’ $30 to Five Guys. #FloridaDerby @GulfstreamPark pic.twitter.com/Jg4AvSAFea

I felt so busy that I didn’t make much progress writing-wise. But I did have a few things published.

This past Friday, I had three things go live. The one I was most excited about was for Real Simple: “5 Surprisingly Great Freebies You Can Get With Your Library Card.” I had interacted with the editor there a little bit on Twitter and via email, and I thought she would be really nice. I was right! She was wonderful to work with, and I hope I can write more for them in the future.

On Friday, I also wrote about the passing of author Anita Shreve for Book Riot: “Anita Shreve, Author of The Pilot’s Wife, Passes Away at 71. Her books are so beautiful. It was also odd for me to write this obit, because parts of her writing life – struggling at first and then writing for magazines before the publication of her first novel – seem so much like mine.

I also wrote a quick post for Bridgehead Media’s new blog: “Do you really need a smart watch?” (Shameless plug: if you know anyone looking for some content writing, I’m your gal. Hit me up.)

I just barely made my quota for Book Riot, honestly by the skin of my teeth. (I have to write so many posts, or I’ll get the boot.) In addition to the obit for Anita Shreve, I wrote these two posts:

Earlier this month, I had two other piece of writing published that were/are close to my heart. The first is for Pacific Standard. It is about marine pollution and sea turtles.

The second is an interview of Terri Witek, who I’ve known for a long time. I can honestly say that without her, I probably wouldn’t have graduated from college at all let alone be closing in on an MFA. They say you’re not supposed to interview people you know, but I honestly think that us having known each other for so long made the interview better. It was published in Entropy, and you should read it and Terri’s book when you get a chance.

What I’m Working On Right Now

I’ve been talking with a few photographers to write essays to match their astounding, beautiful, amazing work. One photographer is a portrait artist, and we’re working on a piece that has to do with strides in the LGBT+ religious community (no spoilers though). Another photographer I’m working with specializes in marine life photography. I’m actively trying to sell some pitches on that.

I’m interviewing a few more authors as soon as I get my act together. I’m also working on more articles, editing my novel, and doing research for my nonfiction book about my grandfather. (Did I mention I also have a day job? Hahaha X-X)

I also have two book reviews due this month, and I’m working on more. How do I have time to read? I really don’t know.

I’ll be honest, some of these were audiobooks, otherwise, I’d have no time to do anything else at all. lol. I also started half of these months ago. I started reading Horse Heaven in 2016.

I’m looking for recommendations on:

What about you? What are you reading? Do you need any recommendations? Leave a comment, and I’ll give you a rec.